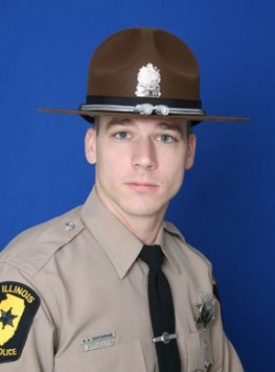 Kyle was born in Maryville, Illinois on April 11th, 1980. After growing up in Collinsville, Kyle and his family moved to St. Jacob in 1990. He graduated from Triad High School in 1998 and received his Associates Degree in Criminal Justice at Lewis and Clark College. After college, Kyle began his law enforcement career in Staunton and was a Madison County sheriff’s deputy from 2004 to 2009. During his time as a sheriff’s deputy, Kyle married his high school sweetheart, Sarah, on September 16th, 2006. Nearly two years later, Kyle and Sarah welcomed their daughter, Kaylee, into the world. Kaylee was daddy’s little girl and his pride and love for his daughter was evident to everyone who knew Kyle.

Life was going quite well and while Kyle loved his job with the county, his dream was to become an Illinois State Trooper. After a lot of hard work and dedication, his dream became a reality when he was sworn in as a state trooper in 2009. In 2011, Kyle and Sarah welcomed their son, Camden, into the world. Kyle was so excited to welcome their baby boy and looked forward to the days he could take him hunting and fishing. Shortly before Kyle’s death in 2012, he had been assigned to motorcycle patrol in District 18, based in Montgomery County in Litchfield. He had requested the move so that he could work the day shift, allowing him more time with Sarah, Kaylee, and Camden.

According to Kyle’s family, he always had an obsession with lights and sirens since early childhood. Kyle would decorate his bedroom with flashing construction lights, often making it difficult for his brother to sleep. Some of Kyle’s favorite toys as a child were those with lights and sirens. Even though Kyle’s passion for law enforcement was quite evident, he was also committed to helping others. Kyle’s family and friends remember him as the go-to person anytime someone needed help. It didn’t matter if Kyle knew the person in need or not…he would lend a hand no questions asked. Just before his death, Kyle was one of 29 Illinois Troopers sent to New Jersey to provide aid for those affected by Hurricane Sandy.

Shortly after Kyle’s return from New Jersey, he was struck and killed by a tractor trailer during a traffic stop on November 26, 2012, near Raymond, Illinois. Kyle was only 32 years old. This was not his plan. The lives of Sarah, Kaylee, and Camden, along with all of Kyle’s other family, friends, and coworkers, were forever changed because the “Move Over” law was broken. Sarah, with the help of Kyle’s friends and family, makes it a priority to recognize the vital and dangerous role that officers play in keeping everyone safe. It is important to Kyle’s family to pay forward the love and support received to the families of other first responders killed or critically injured in the line of duty.

The family and friends of Kyle ask you to exercise caution when on the roads and Move Over when you see flashing lights on the side of the road. Remember – there is a family behind every uniform and a split second choice can impact many lives forever.